This was an opportunity for our pupils to experience what life was like for people in the near and quite distant past through visits to local heritage sites and museums.

Years 5 and 6 both visited the Peoples History Museum in Manchester. They took part in workshops about the suffragette movement and watched a dramatic

recreation of the life of famous Manchester based suffragette Hannah Mitchell. Years 5 and 6 followed up their visits with some pieces of writing on the suffragettes and biographies of significant women in the movement.

Year 4 and Perfect Purples visited Lyme Park. They had the opportunity to tour the grand and historic Lyme Hall and completed

workshops about the Leigh family. They learned about how the Leigh Family made their money in the coal industry and how

For Time Travellers Week in Year 3 their modern 21st century classroom was transformed into a Victorian era classroom. They had a visit from a Victorian teacher who presented a day in the life of a typical Victorian child their age. Would they prefer life as a

Victorian child or a child in the present?

Our Year 2 classes visited Quarry Bank Mill. They learned how the mill worked in the industrial revolution and how the workers

lived at this time. They were shocked to find out that children their age would have to work up to twelve hours a day and then go to school!

Year 1 went on a visit to Bramall Hall. Workshops were conducted and comparisons were made with how toys were different in the Tudor era than they are now. They learned about how Tudor houses were built and run and how people lived during that time. 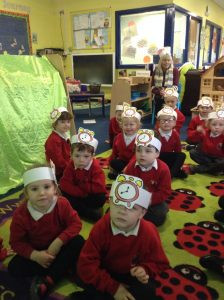 In EYFS the class teams incorporated Time Travellers week into key groups throughout the week. They made time traveller hats and learned what schools were like in the past. They also made their own toys!

An exciting week was enjoyed by all pupils and staff learning about our local heritage.